There are many reasons as to why this summer has been one of the best that I have ever had. One of my highlights of this summer was being able to attend this year’s Teaching the Hudson Valley Institute at the beautiful Franklin D. Roosevelt Presidential Museum and Library in historic Hyde Park. If I do say so myself, this year’s program was, by far, the best one I have attended so far due to how relatable it was for me, as both a future teacher and a student.

The opening workshop’s theme of getting students to think critically while engaging in conversation struck me in many ways, as I could relate to it from my childhood experiences in school. Philip Yenawine, co-founder of Visual Thinking Strategies, introduced multiple paintings of different aspects of the Hudson River Valley. After he went around the room asking for the various perspectives, he introduced his reasoning for conducting the activity. In the classroom, teachers need to create an open space for children to speak freely without immediately being told that their opinions are incorrect. Children should have an open space to voice their opinions in various ways and, over time, learn how to think critically about why authors and artists have created a certain perspective.

Being able to relate to this theme of “free conversation” and the benefits it provides to students is a critical aspect of understanding your role as a teacher. A teacher should never put down a student who doesn’t share his or her’s same opinion. Rather, the teacher should ask the students open-ended questions to allow room for critical thinking and opinions, despite being right or wrong. The moment we lose our students to fear of answering, we have a much harder time pulling them back in and hearing an opinion again. As a student, I constantly struggle with being afraid to speak up. I would write down my opinion, but never say it out loud. I was always shot down by other students or a teacher who would assume that I would have the wrong answer. As a future teacher, I vow to always allow room for my children to speak freely without overshadowing their fears by being prepared to tell them they are wrong. I vow to never silence my students’ voices from such fears.

Last but not least, as I was walking around the F.D.R. property, I couldn’t help but feel tempted to go on the Springwood  tour and look around the Presidential Library and Museum as soon as the program was finished for the day. Luckily, I was able to go on multiple tours courtesy of Jeff Urbin and one of his workshops, “Finding Eleanor in the Presidential Museum.”
During “Finding Eleanor in the Presidential Museum,” we not only learned about the partnership between Eleanor and Franklin, but we learned about how Eleanor related to the theme of this year’s institute. Eleanor Roosevelt was like a teacher in many ways. As she traveled around the world for F.D.R., she wanted to see the world for what it really was. She asked the people to tell her what they saw, so she could see things from another perspective without the bias of what she had already seen. Lastly, she wanted everyone to feel special during her time with them. As they talk, she listened. She never interrupted them or told them what she wanted them to believe or think. After Jeff Urbin’s workshop, we were able to walk around the museum and see this for ourselves. Within the museum, there are many exhibits that prove the similarities between a teacher and Eleanor Roosevelt. As a future teacher, she is someone I look up to. I want to view my students in their world and be able to provide the comfort that Eleanor provided to so many others as a leader.

Thank you to everyone from Teaching the Hudson Valley for putting together yet another spectacular summer institute! This truly is a wonderful program that I look forward to every year and learn so much about what it truly means to be asuccessful educator. -Kimberly Gomez 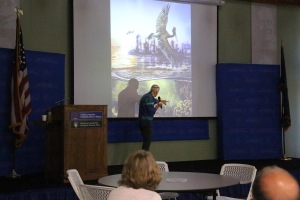 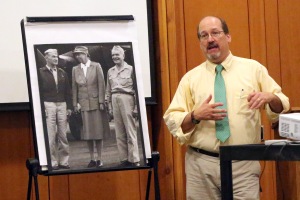 By hrvi in Uncategorized on August 5, 2015.
← Q & A with author/educator/archivist Matt Thorenz My Day at THV – Emily Lombardo →