“This month, KWNM brings you a Q&A with a member of its New York Steering Committee, Rear-Admiral J. Robert Lunney. A native of New York City, Admiral Lunney enlisted in the US Navy at the age of 17. His distinguished 43-year career included service in two wars-WWII and the Korean War. From 1945-1946, he served with the Naval Amphibious Forces-Pacific, and during the Korean War he served in Korea with the Military Sea Transportation Service as a staff officer. Admiral Lunney has received numerous awards for his service. Most notably, he has been recognized for his participation in “one of the greatest marine rescues in the history of the world” at Hungnam, North Korea. Here, Admiral Lunney and his crew miraculously saved 14,000 Korean refugees from enemy forces by boarding them onto theS.S. Meredith Victory cargo ship which was built for only 12 passengers.” -Courtesy of the Korean War National Museum Library and Cultural Center
What inspired your decision to enlist in the Navy? 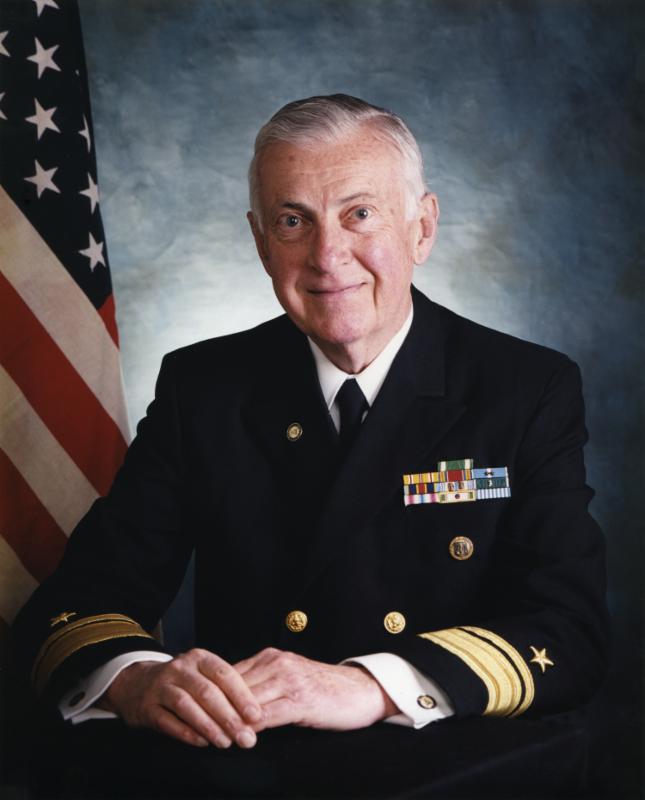 I originally enlisted in the Navy, at 17, during WWII (Naval Amphibious Forces-Pacific) with a sense of duty to serve my country and to help take a stand against enemies that attacked us. Going back before the Revolutionary War, there was also a family tradition of serving our country. My service during the Korean War, as an officer, was aboard a merchant ship, SS Meredith Victory, chartered to the Military Sea Transportation Service operating under Navy orders at all times.
You and your crew historically rescued 14,000 Korean refugees by making room and boarding them onto the SS Meredith Victory to avoid enemy forces. How would you describe that 16-hour long operation? What thoughts went through your mind?
During the dramatic rescue in Dec. 1950 at Hungnam, North Korea, of the 14,000 refugees the greatest concern was for all the officers and crew to perform their assigned duties as expeditiously as possible. The enemy had surrounded the port and the perimeter, at times no more than 3,000 yards from our ship, was closing rapidly. Elements of the 3rd Infantry Division were taking casualties holding the line as we were boarding the refugees as fast as we could. A great fear was the possible shortfall of one of the artillery shells on our ship as we still had 300 tons of jet fuel in drums located in a lower hold. Although underwater demolition teams were placing explosives adjacent to our ship and throughout the port, we continued to load as many refugees as possible. As we transited enemy mine fields we were the last ship to leave with refugees, 17 of them having been wounded. Fortunately, at all times we had the protective fire and support of the Navy and Air Force.
How have your wartime experiences affected your life?
Wartime service, especially in combat, is an experience that generally helps build a stronger character and qualities of leadership.
What was the most important lesson you learned during your time in the Navy?
My wartime experience in the military taught me the essential elements of leadership. The outstanding example of Captain Leonard P. LaRue, Master of the Meredith Victory was a fine example of decisive thinking and resolving to do the right thing. Our Captain was told that because of the very dangerous exigencies he could not be ordered to undertake the rescue but he immediately, after viewing the mass of humanity on the beach, volunteered to take our ship in. His calm demeanor and courage in a most stressful situation was a true example of outstanding leadership. This must be understood with his exceptional capacity to lead having been clearly evident three months before when we participated at the Inchon Landing, September 1950.
What do you want future generations to know about the Korean War?
Future generations must know how America promptly responded to the North Korean invasion and helped guarantee the integrity of the Republic of Korea and the freedom of its people. Today, we maintain support for Korea, a trusted ally and friend with shared values of freedom and democracy.
Why are you supportive of the Campaign to build the Korean War National Museum, Library and Cultural Center?
The KWNM will exhibit the tremendous success of the South Korean people in rebuilding their nation into one of Asia’s greatest economies. It will also demonstrate the substantial efforts of many nations, especially America, in defending South Korea against its communist enemy. The Center plans to honor the veterans and educate the public as to the great sacrifices made by these courageous men and women who served in that War. In addition to creating an exhibtion of Korean culture, the Center will display the history of the Korean people and emphasize the close relation between America and South Korea. The history of the Korean War should not be forgotten as it is important for the young of today to see history as a living force which can shape the ideas of tomorrow.